Many parents have decided to use the current lockdown as an opportunity to start toilet training their children.  Today, Rachel Shirazi shares her positive experience of toilet training her daughter Ana’el with us.

Toilet training can feel like a daunting task!  Fortunately there are some wonderful resources that can be accessed online to help you prepare your child for pants.  Take a look at the Bladder & Bowel UK website for resources, including the ‘pants4school’ initiative recently launched by June Rogers and Nicola Enoch – an awareness campaign to support and encourage parents and professionals to enable children with Down Syndrome to be in pants by the time they start school – links can be found at the bottom of the post.  The Facebook DSUK going potty?! toilet training groups are brilliant for support and guidance.

If you have made the decision to go for it – good luck!

The summer holiday was a long 6 weeks and I had decided it would be the perfect time to potty train Ana’el.  She was 4 years and 3 months old.  We had tried for a week in February, and she did some wees on the toilet but I really felt that she was just not understanding what she was meant to do.  I was advised to put her back in nappies, leave it for a bit and then try again and I’m so pleased that I did.  It would have just been unnecessary stress for me and Ana’el.

Before the summer I joined a brilliant group on Facebook called GOING POTTY! Toilet training advice and tips for children with Down Syndrome.  This helped me so much, knowing that I was not alone and other Mums were going through this tricky stage too.  There were lots of tips on there that I followed.

In the weeks leading up to the summer I made sure to put Ana’el on the potty every evening before her bath.  We got books out the library and she loved talking about it.  We went shopping together and she chose a potty, it had a high back which was perfect for her and she loved sitting on it.  We also bought lots of Peppa pig knickers which were a big motivator for her.

On the first day of the holidays I told Ana’el that we weren’t going to wear nappies anymore and we were going to wear our brand new knickers, she was very excited.  I hung a star chart on the wall and got lots of stickers ready.  I let her walk around the house in just knickers and a t-shirt which helped a lot because when she did a wee in her knickers she felt it on her legs straight away. 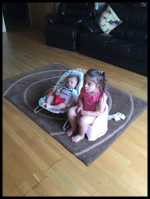 The first 2 weeks were hard, I would take Ana’el to the toilet every half hour/hour and when she did do a wee, we celebrated.  I sang and I clapped and made such  big deal of it.  I wanted her to know she was doing amazing. When she had accidents we said never mind-remember wee wees go on the potty.  We went through a stage where Ana’el would do some of a wee and then say she’s finished but then have an accident five minutes later.  I encouraged her to sit on the toilet for longer.  I would give her the iPad to watch or read her stories.  I encouraged her to push all the wee wee out and make sure there’s nothing left.

She found doing poos very difficult and became quite constipated.  She would wait until the evenings when I put her nappy on for bed to do her poos.

We didn’t go anywhere those first 2 weeks because I didn’t want to put a nappy on her and confuse her. Slowly slowly the accidents became less frequent. 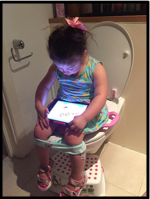 By week 3 Ana’el was starting to get it, I would still take her every hour but she was getting much better at staying dry.  She loved being made such a big deal of when she did a wee and would get so excited to tell Daddy and other family members.  We went out a couple of times with a pull up on, but I made sure there were places with a toilet nearby.  I carried her little seat around with her and she was happy to do wees anywhere.

By week 4 she was staying dry but only because I was continuously taking her.  If I ever forgot to take her she’d have an accident.  I felt like I had been training her for so long and worried that she still didn’t know when a wee was coming.  I didn’t want to give up though and spoke to her about stopping the wee before it comes out and quickly running to the potty.  She started to do this and would catch her wee just after it started and run to the potty.

This was a huge milestone that she was starting to recognise when the wees were coming and we made sure to praise her so much.

During week 5, Ana’el did her first poo on the potty, I could tell she was very nervous and kept trying to stand up, sitting on the potty was very unusual for her and it would take her time to get used it.  We made such a big deal and Ana’el chose a present from the toy shop for doing so well.

For anyone going through the potty training stage here are some things that I learnt.

Ana’el is almost 5 and is doing so well.  She asks to go to the toilet or just goes on her own. She still needs a lot of encouragement with her poos as she avoids doing them and won’t poo on the toilet at school. We try to do them in the evenings but that doesn’t always work.

When she goes to new places with people she doesn’t know she does sometimes still have accidents. (She had one at Sunday club today because her usual 1:1 wasn’t there and she was too nervous to say she needed a wee).

Overall its taken a long time but I was lucky to be able to spend those 6 weeks of the holidays training her.

Thanks Rachel, for sharing your experience with us.  If you would like more information about toilet training a child with Down Syndrome, take a look at the links below for resources and advice: