Prior to having our daughter I didn’t really know anything about Makaton (with her being our first child we hadn’t even heard of Mr Tumble).  So when it was suggested to us that we may need to use signing to help us to communicate, I didn’t really know where to look.  In the past 3 years however, it has become the cornerstone of our communication.

Makaton is a sign and symbol language designed to support speech, the signs are based on British Sign Language and used in spoken word order.

Symbols are black and white drawings which represent a word.  These can be used as well as or instead of a sign.  The key thing we were taught when learning Makaton is to always say the word along with the sign.

Why does it help?

Children with Down Syndrome have a specific speech delay and our little one has had glue ear (common in all kids but particularly in children with DS) since a very young age causing some hearing loss so we knew we’d need something to support her communication.

People with DS tend to be strong visual learners, so having a visual support to a spoken word can make it easier to learn and remember.  It has been shown to speed up language development (not delay it, which is a common misconception – one I had in the past).

We were lucky enough to attend a beginners Makaton course provided by a local charity when our daughter was around 6 months old. It taught us the core vocabulary and inspired by our new found knowledge we started with 5 basic signs – more, food, drink, milk and book.  I found it hard to remember to consistently sign but we tried our best; we watched copious amounts of Singing Hands and Mr Tumble nursery rhymes (both of whom use Makaton signing) and one day, probably at around 18 months, she started to use the signs for more and food (she’s got her priorities!).  She quickly realised this got her what she wanted along with lots of clapping from her over excited parents. Once we started to get something back signing became a lot more natural, and her vocabulary increased exponentially.  As her speech begins to come the words are always accompanied by a sign, and as she gets more confident she drops them.  Because her speech clarity isn’t great at the moment, it is useful for us to have the signs to back it up. 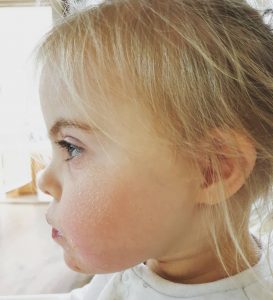 For us the most satisfying thing about using Makaton has been seeing how much she comprehends, it is so easy to underestimate someone because they cant verbalise something, it has really opened my eyes to the fact that she understands so much more than I sometimes assume.  It has been hugely important in easing the toddler frustration, enabling her to make choices and express herself.  I still get a buzz watching her master a new sign or sign along to a song.

Makaton has been a great resource for her mainstream nursery, the staff have taught themselves and the kids it, giving them a new skill too – an example of inclusion benefitting everyone.  This week they made a video of them signing ‘You’ve got a friend in me’ – it was a hit with a kids and amazing to see them all really embrace signing.

We have started signing with our youngest too and I love that she will have that skill as she gets older.   It also comes in handy when trying to communicate across a  bar (or through a window as the case may be at the moment) and makes us great at charades!

There some brilliant resources online to support people to learn Makaton:

The Makaton Charity have a number of resources available on their website for free and to buy including story downloads and their sign of the week on social media.  Since lockdown there are also some beginners courses online – check out their website for information.

Singing Hands have several DVDs – nursery rhymes, pop music and christmas songs along with their carpark karaoke and other videos available on YouTube.  They usually perform live around the country – but during lockdown have started online sessions for all ages – nursery rhymes, pop songs and even wine and sign for the grown ups!

Isabella Signs signs to popular songs, as well as doing a Makaton sign of the day and song tutorials on social media.

Makaton with Lucinda – Lucinda and her mum Nikki do a sign of the day on social media.

Something Special – most parents will have seen Mr Tumble at some point!  A regular on CBeebies he uses Makaton signing.

Wouldn’t Change A Thing is doing a Saturday Signs feature on Facebook where one of our family signs the weekly Makaton Sign of the Week, a good chance to practice your signing!

Thanks to Rainbow Nurseries for allowing us to share their video.