May 4th marks the start of national weaning week.  Here, Grace shares her experience of weaning her son Maxwell.

Maxwell is 4.5 years old.  He has a 2.5 year old little brother called Hector, attends mainstream preschool and is a model with Zebedee Management – he has been in several big campaigns including for River Island – not hard to see why!   Maxwell likes music, dancing and watching films. He’s currently obsessed with the minions from despicable me and does a great impression!

Many children with Down Syndrome take to weaning really well, parents follow baby led weaning or the more traditional route with much success.  However, as with all children, sometimes things are not so straightforward.  Maxwell has had some sensory issues surrounding food and consequently weaning has taken a different course – but with perseverance he has made great progress. 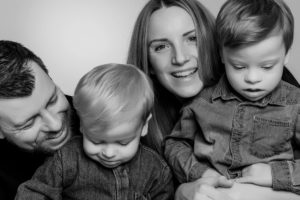 Tell us a bit about feeding Maxwell as a baby

Maxwell was our first child. Now 4 and a half, he was born at 38 weeks.  He was an incredibly sleepy baby. I was determined to breast feed and was told to feed him on demand. The only problem was he never demanded (a theme that would continue!).  I expressed for the first two and a half months.  It was hard to judge how often and how much to feed him as he never asked for milk.  Thankfully at 2.5 months he had gained strength and finally latched on, we then never looked back. I ended up feeding him till he got teeth! 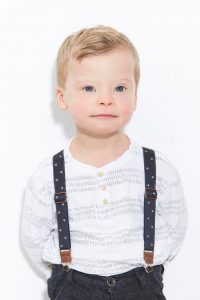 Maxwell’s lack of interest in food continued.  He was still content with milk at 6 months and I decided not to rush weaning him.  We started in the end at 8 months.  I had always intended on going down the baby led weaning route, but I knew from the off that this would not be possible.  We therefore started with purées and took inspiration from various Annabel Karmel weaning books.

At first we had to engage in a lot of distraction to get him to eat; singing, books, tv etc.  It also took a long time to build texture into his diet.  At the beginning he was fine with completely smooth fruit and vegetable purées, but once I started to introduce meat, even if puréed he would gag.  I had to be cruel to be kind and slowly over a couple of years moved onto mashed food rather than purées and eventually to food cut up into small pieces.  He still struggles with moving food around his mouth and chewing properly.  I think over the years he has become very good at swallowing large lumps!  Maxwell’s lack of interest in food meant he wasn’t inquisitive about it.  Instead I would describe him as very wary of food.  I remember one day trying to encourage him to finger feed and he kept putting the food in my mouth instead of his.  At 4.5 he still won’t finger feed and will only eat using a spoon.  I believe this is largely a sensory issue as he hates getting food on his hands.  He also has a tendency to be lazy – even now at 4.5 he would be happy for me to feed him, and I have to be strong and insist he does it himself. 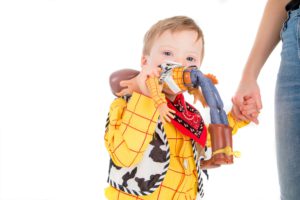 Was there any support available to you?

I attended an NHS feeding clinic for a while, but as he was gaining weight and didn’t have an unsafe swallow, he was never high priority. I have also had some Occupational Therapy input, which has been useful.

What are Maxwell’s favourite foods?

Maxwell only started asking for food when hungry  at about 3 and for particular food at about 3.5. Now he asks for cake after every meal, including breakfast! So I would say that cake is definitely his favourite food.

How is he doing now?

He still has limitations on his eating. His meals still have to be softish in texture/moist and he will only eat using a spoon.  This makes snacks on the go tricky and I have to be prepared.  However, he’s not fussy what he eats and this means he has a balanced healthy diet.  He’s putting on weight and growing nicely which is all that matters really. 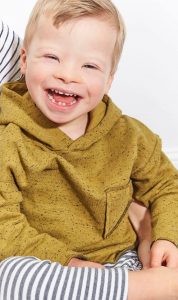 Any tips for parents who are experiencing similar issues?

I would say try and persevere with the problems you encounter, e.g. in Maxwell’s case I wish I had continued to place finger food in front of him at every meal and done more messy play with food from a young age.  However, if the problems persist, as long as your child is healthy try not to get too hung up on what you think your child should be doing/eating.  As with many other aspects of this journey we are on, I have learnt from the feeding issues we have faced to let go of the expectations I had for Maxwell and to try and to see things through his eyes.  I’ve made peace with the fact that Maxwell at the moment takes no joy out of eating an ice cream on a family day out and that he gets sufficient enjoyment from the home made snack that I’ve brought along with me.

Thanks Grace, for sharing your story with us.

For advice or support about weaning take a look at the Down Syndrome Association website. 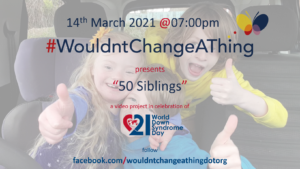