This week, Christina Logan shares her experience of adopting two children with Down Syndrome. 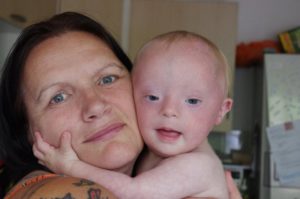 I’ve been a foster carer for many years with a lot of children passing through my care. In early 2010 I was told of a young woman who was pregnant and was asked if I would mentor her; when the baby was born it would come to me and I would teach her how to care for it, in the hope that the baby could be returned to her care.  In early June I got a call that baby had arrived and he had Down’s syndrome, would I still take him? I of course said yes. I had been on holiday to Florida and the baby was 10 days old by the time I got home. I went to the hospital to collect him and discovered that his parents had walked out as soon as he was born and wanted no more contact with him. 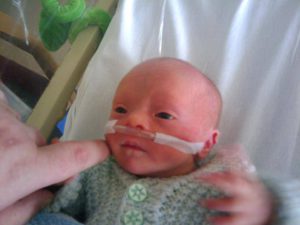 I walked into the ward where babies lay in little plastic cots, they had balloons and cards around them, except the one at the window he had nothing. In the cot was the tiniest baby I had ever seen, wearing what we called Simon Cowell trousers, brown cords rolled up several times at both legs and waist and they were still huge on him. Apparently his parents had removed all the clothes they had brought and staff had to rummage in the left behind items. They had also removed his name after they found he had DS and gave him a made up second name.  His first name was someone in a movie they had watched the night before, ‘Natural Born Killers’! 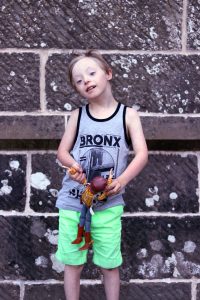 After we got him home I knew he wasn’t going anywhere, I instantly fell in love with him as did the family. I contacted my social worker and told them if he was put forward for adoption I wanted to be considered. Within a few days it was clear he would be adopted. Luckily I was put forward and Mikey became my son. He’s now 9 years old and we as a family couldn’t be happier, he has brought so much joy into our lives

Moving forward to 2016 at an adoption open day a 6 year old girl caught my eye, I immediately told my social worker that I wanted to adopt her. She also has DS, truth be told if it wasn’t for Mikey I doubt I would have put myself forward.

I would honestly recommend adoption to anyone, I have adopted three times (my son adopted at 3 months was a shaken baby).  I remember years ago thinking I couldn’t love a child as much as one of my birth children, this is absolute nonsense I adore all seven of my children equally.

Unfortunately there are many children with disabilities and older children looking for forever homes, a quick look at the ‘Be My Parent’ site will break your heart. Adoption has certainly enriched my life and the lives of my birth children. If you are thinking of adoption, have a chat with your local authority and you won’t regret it. If anyone wants to chat to me about adoption feel free to contact me.

Thanks to Christina, for sharing her experience with us.